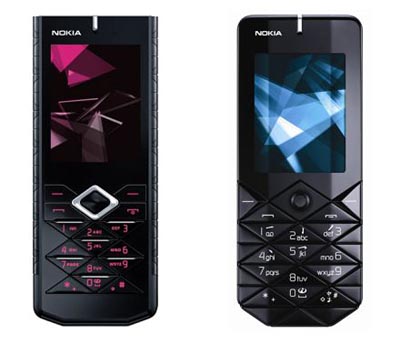 I realize that beauty is in the eye of the beholder, but I’m not a fan of the Nokia 7900 and Nokia 7500 Prism cell phones that I am beholding. Nokia went official with their Prism line of mobile phones yesterday, aiming the geometric candybars at “style-conscious consumers.” The diamond-cut designs are meant to separate it from conventional phones… mission accomplished!

On the left is the Nokia 7900 Prism. Most of the body has been dressed in black, with the exception of the silver diamond-shaped directional pad and your choice of 49 illumination colors for the diamond-shaped numerical keys. The Nokia 7900 boasts an OLED 16M color display, 2 megapixel camera, 1GB internal memory, quad-band 3G radios, and an anodized aluminum cover on the back. Strangely, there’s no microSD slot in sight.

On the right is the Nokia 7500 Prism. We saw this phone a little while back, but now it’s received an official welcome. Like the 7900, it is mostly black and it also comes with customizable color accents. Internal memory is minimal, so this phone has microSD expansion. The on-board 2.0 megapixel camera is good for videos as well.