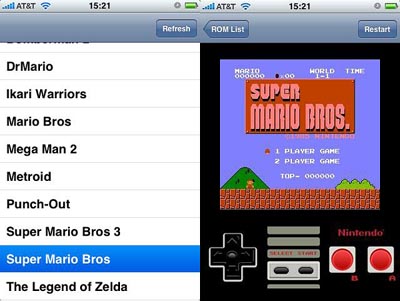 And Steve Jobs said that third party applications couldn’t run on the iPhone. Leave it up to the hacking community to prove him wrong and obviously one of the first things they’d try to do is load up an NES emulator on that touch-tastic cell phone. After all, Super Mario Bros is way more fun than Doom.

The iPhone NES emulator is based on InfoNES, a readily available open-source portable NES emulator. The iPhone-friendly version is still in its relative infancy, so it’s not quite ready to handle sound and they say that it runs “a bit slower than a real NES.” It’s hard to say if this is for real or if it’s one big hoax, because in the video below, you can clearly hear some keyboard clacking going on. That, and the fact that Mario keeps running even after the user lets go of the d-pad (sticky keys?).

The on-screen controls would make sense, though, given the multi-touch capabilities of the iPhone. Let’s just hope it can keep up to my crazy Contra button-mashing skills.