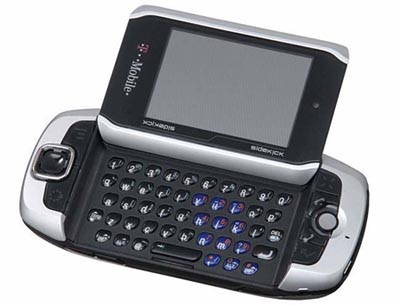 While a lot of attention is currently being paid to the Motorola Zante, otherwise known as the Sidekick Slide, it has been noted that the Motorola-manufactured device is not the same as the next-gen Sidekick. Instead, the official Sidekick 4 is still getting produced by the people at Sharp, getting its OS from Danger, and being offered through T-Mobile USA. Also known as the Shuriken, the SK4 may be launching sooner rather than later.

From what we hear, the next-generation Sidekick will come with a much larger widescreen display, potentially covering the entire middle section of the device (the part that rotates up to reveal the QWERTY keyboard). It’ll probably have the same face buttons and trackball as the SK3 which precedes it, and unfortunately for any shutterbugs out there, it’s said that they’re sticking with a measly 1.3 megapixel cam too.

The Sidekick 4 has been assigned the model number PV250, placing it above the SK3’s PV200. Am I getting ahead of myself anticipating a PV300?