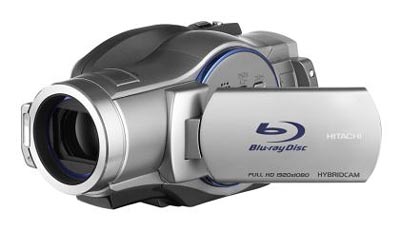 While many people have been consuming high definition content for a while now, very few have taken the plunge into actually producing HD goodness. With clever offerings like this, we may soon see soccer moms recording their kids’ games in full HD.

Hitachi announced a pair of HD camcorders that record super crisp video onto blank Blu-ray discs, one of which also features a built-in 30GB hard drive in case you happen to be running low on BD-R media. The DZ-BD7HA is Hitachi’s hybrid model, giving you enough room for up to 4 hours of full HD 1920×1080 HX mode video on its hard drive, with extra space coming via the Blu-ray drive. If you switch to HS mode (1440×1080), this number jumps to “almost 8 hours.” Movies can be sent from the HDD to a Blu-ray or DVD disc without the aid of a computer.

Other key features include 10x zoom, HDMI and component video output, a built-in interactive guide to familiarize yourself with the features, and a 5.3 megapixel image sensor (stills captured at 4.32 megapixels). If you don’t need the hard drive and would prefer an SD expansion slot, the less expensive DZ-BD70A appears to be otherwise identical to the DZ-BD7HA.

Both camcorders are scheduled to ship in October, being priced at $1299 and $1499 for the DZ-BD70A HDD-less model and DZ-BD7HA hybrid model, respectively.