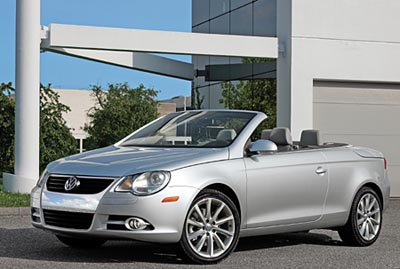 Even though Volkswagen didn’t make much of a hullabaloo over the launch of the Eos hardtop convertible in Canada, the roadster is almost completely sold out north of the 49th parallel. There was no advertising campaign, no television commercial marking the launch of this new vehicle, so it can only be assumed that this summer-loving car got sold based on word of mouth alone.

Based on the Rabbit, the Eos convertible gets powered by either 2.0-liter turbo four cylinder engine for 200hp or a 3.2-liter narrow-angle V6 for 250 horsepower. There is a considerable price difference between the two models… something like $7,000.

Volkswagen was originally planning to “pull out all the stops for an advertising campaign to roll it out”, but based on how sales are going, they might want to cancel that ad campaign and save themselves a few bucks. It seems that everyone wants a relatively affordable convertible these days, because the Pontiac Solstice and Saturn Sky have been selling like hotcakes too.