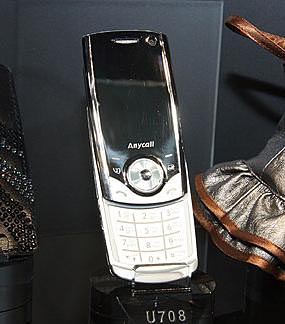 If you want to see a phone that defines what Samsung is all about, you would not be ill-advised to check out the recently released U708. Like so many other phones in Samsung’s lineup, the U708 is remarkably thin (12.1mm), takes on a slider form factor, and frankly looks pretty damn sexy.

In addition to its standard tri-band GSM/GPRS/EDGE radio, the Samsung U708 can also do the high-speed dance via HSDPA. The slide-out keypad is pretty standard, but the main call and end buttons on the face of the phone are touch-sensitive, similar to that found on the LG Chocolate. The large 2.2-inch QVGA color display is quite nice, naturally, but when the backlight is turned off, the glass surface can function as a mirror.