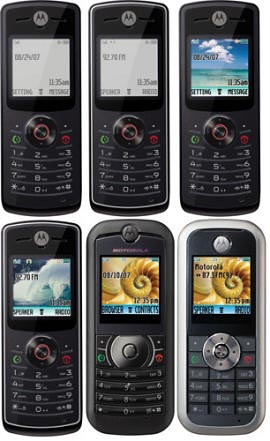 The rest of the mobile phone industry may be scrambling to create iPhone clones and handsets with multi-megapixel cameras, but Motorola doesn’t want to get mixed up in that whole mess. Apparently, the big M doesn’t want to bother with hitting up the high-end all that much these days, but Motorola has just revealed six new budget candybars.

There was no press release announcing the launch, so you’ve got to wonder if Motorola themselves are even interested in these clearly entry-level handsets. There’s no indication in terms of features and specifications, but you’ve got to assume that these SLVR-like phones will be pretty basic. We do have the model numbers though: W206, W213, W156, W160, W175 and W180.

Interestingly, two of them have monochrome displays. Like, who does that anymore?