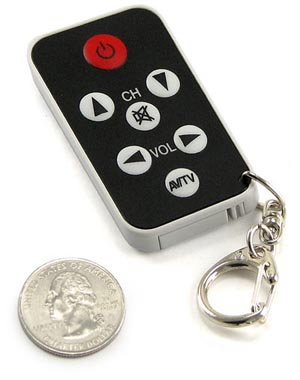 In many ways, the Ninja Remote is just a glorified universal remote, but what makes it cool is that you don’t need to do any programming ahead of time and what’s more, it’s small enough that you can easily avoid detection. The tiny device — you can gauge its proportions next to the almighty quarter — simply needs to be pointed at your intended target (a television). Hold the mute button for a few seconds until the sound shuts off on the TV and you’re all synched up.

From here, you have basic control over changing the channels and adjusting the volume. The developers of the Ninja Remote claim that it will be able to invade and conquer a wide range of TV sets, including those made by Sony, Panasonic, Samsung, Toshiba, Sanyo, Aiwa, Mitsubishi, Philips, JVC, Sharp, and more.

Normally, ninjas have to partake in some rather dangerous missions. I guess sometimes they just want to control the TV across the street. Shinobi out!