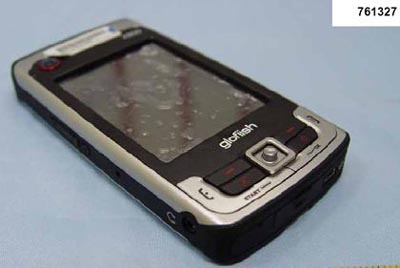 Around these parts, we don’t normally hear very much about E-Ten’s cell phones. People are too caught up in the latest RAZR or the hottest new BlackBerry. Maybe with this latest FCC approval, the company will be able to make a little bit bigger of a splash. The E-Ten Glofiish X800 (the double i is not a typo) is a powerful Windows Mobile 6 cell phone that features super-fast HSDPA/WCDMA connectivity. The FCC has given it the all important stamp of approval, so that means that you may soon be able to go swimming through the seas of mobile high-speed courtesy of the Glofiish X800.

In case you missed its initial introduction at CeBIT 2007, the E-Ten Glofiish X800 comes with all sorts of cool features, but you’ll notice that it does not have a conventional keypad. That’s because the large color display is a touchscreen and that’s why they’ve tossed a stylus into the package. Other good stuff includes VoIP, video calling, WiFi, GPS, speakerphone, microSD expansion, a useful Transcriber function, and Location SMS.

E-Ten hasn’t made any indication as to when they plan on launching the Glofiish X800 in the States, so until then, your guess is as good as mine.