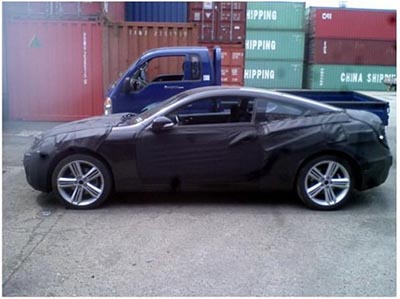 Hyundai has officially confirmed reports that they are working on a sports coupe to replace the current Tiburon, and this new car will be rear-wheel-drive. The current Tiburon is front-wheel-drive, and as such, has been snubbed by many racing purists as not having the right platform for “true sports car manners.”

The RWD platform that underpins this yet unnamed coupe will the the same one that lies beneath the already-announced Genesis sedan. The Genesis is expected to hit showrooms in about a year, whereas the Tiburon replacement won’t become available to the public until about a year after that, most likely as a 2009 model. It’s unlikely that this new pocket rocket will boast the same V8 as the Genesis, but a V6 is quite likely. There’s even word of a boosted V6 as a top-of-the-line model.

Click through the link below for a couple of spy shot galleries.