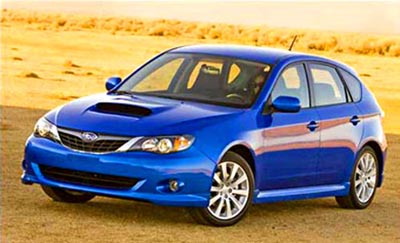 The 2008 Subaru Impreza WRX has received shortage of coverage in the past year, but after all that hype and all that hearsay, what we really want to know is how this AWD beast performs. The guys at Inside Line recently took the 2008 Subaru WRX for a series of track tests, including the slalom and stopping distance tests, and in the end, they determined that the WRX has “gone soft.”

As you recall, the new WRX features the same amount of power as its predecessor — 225hp — getting that jump from the 2.5L flat-four engine. It can do the 0-60mph run in 5.9 seconds and completes its quarter-mile run in 14.4 seconds at 94mph, which is slightly slower than the outgoing model. As you can see from the video below, Subaru has gone a lot softer with the new WRX, providing “no shortage of body roll”. The outward appearance is also much less aggressive and much more tame.

At $30,000, the price point isn’t all that attractive either. That said, even though the new WRX five-door hatchback may look like a family car, it’ll certainly outrun any production Corolla or Camry.