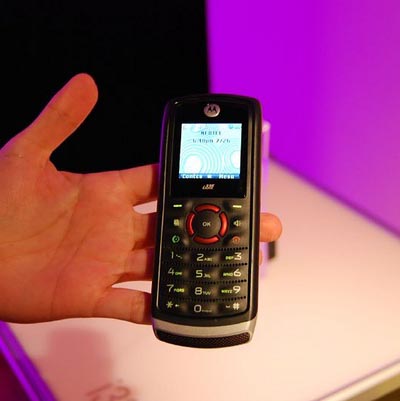 I realize that we’re still in the heat of the summer, but companies have to look beyond the immediate future if they hope to succeed. Although it has not yet been officially announced, the Motorola i335 thin candybar phone was being shown off by the cell phone maker, telling us that this skinny iDEN number will be destined for Sprint-Nextel in time for the holidays.

As you can plainly see, this handset is distinctly more attractive that the fat and clunky iDEN phones that currently grace the Nextel lineup, offering a more streamlined appearance, a comfortable leather-like rubber keypad. and a corrugated plastic back. In many ways, it’s similar to the Motorola i290 that was leaked last month.

From what we can tell, this phone will not have a camera of any kind and its display isn’t exactly the largest in town, but the i335 will have a miniUSB connection and possibly a microSD expansion slot. Sprint also mentions that it will be “affordable.”