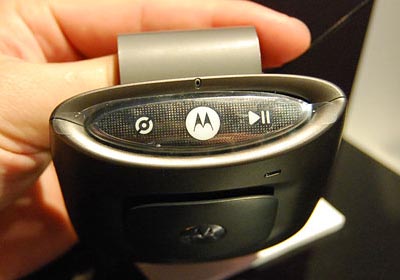 In addition to a sea of RAZR-like cell phones and the skinny i335 iDEN candybar, Motorola also had a juicy little handsfree device on display that just might do the trick for chatting while commuting. Over in New York City at Motorola’s Holiday Show, the big M revealed the ROKR T505 speakerphone, a Bluetooth device that clips to your car’s visor.

That, in itself, isn’t all that interesting, because there are countless Bluetooth speakerphones available on the market already. What makes this pager-looking device a little more special is its ability to take streaming audio via stereo Bluetooth A2DP. That’s what earns it the ROKR moniker, a four-letter indication of its musical inclinations.

Taking its musicality one step further, the MOTOROKR T505 can act as a relay station, so to speak, accepting audio via Bluetooth, only to beam it back out over FM. The double wireless-ness sounds pretty nifty, if you ask me. No word on pricing or availability, but Motorola reps were claiming a solid 20 hours of battery life on this sucker.