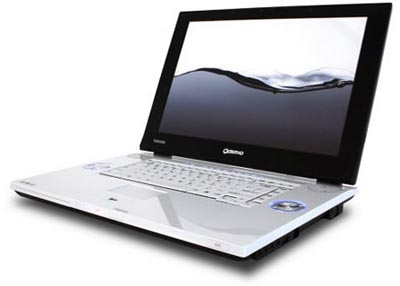 For the past few months, it’s been a pretty hot item to get a notebook with an integrated Blu-ray or HD DVD drive, but that’s not enough for the guys at Toshiba. They want to burn and they want you to burn, so Toshiba has created the Qosmio G45-Avg80 Notebook, the first to include an HD DVD-R burner right out of the box.

Naturally, this entertainment-minded laptop is perfectly capable of full 1080p playback and to keep the aural experience up to snuff, it’s also got Dolby surround sound technology. The large 17-inch display is natively capable of resolutions as high as 1920 x 1200 pixels. The rest of the specs include a fingerprint scanner, a T7300 (2GHz) Core 2 Duo processor, 2GB RAM, dual 160GB hard drives, 512MB NVIDIA GeForce 8600 GT graphics, WiFi (including draft-N), Bluetooth, a webcam, and a quad of Harmon Kardon speakers.

Available directly from Toshiba Direct, the Qosmio G45-Avg80 laptop is priced from $3200.