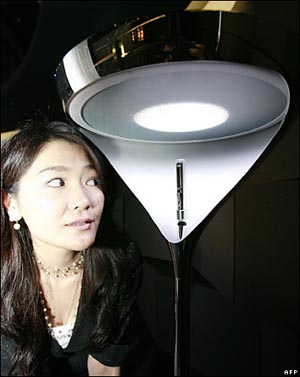 I could make a snide remark about a lightbulb going off in some Sony designer’s head, but I’m not going to, because the very idea is funny enough by itself. Apparently, some kook at Sony decided that it would be a good idea to merge a MP3-playing Walkman with a standing floor lamp. The net result has been dubbed the Sony Hana, meaning “flower” in Japanese.

As you can see, the lamp shade is supposed to look kind of like a flower with silver-plated petals, so that’s where the Hana business comes from. Naturally, an MP3 player on a stick (with a light, mind you) isn’t all that useful if it can’t share those tunes with the people around it. Thus, this lovely invention also boasts full length speakers.

Now, I’m for convergence devices, but this is just a little too weird isn’t it? The Hana is still a prototype, so don’t expect to find it at your local Sony Store just yet. Just be happy they didn’t plunk a PSP, a Blu-ray player, and a CyberShot camera in there too.