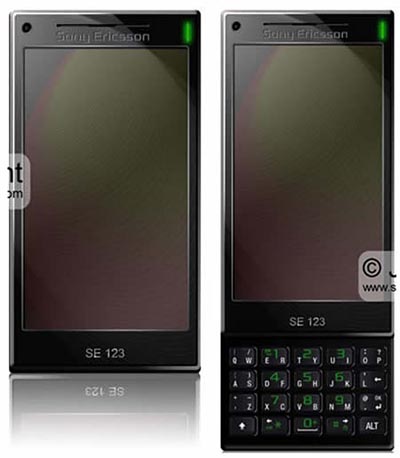 Between the giant touchscreen display and the beautiful slide-out keyboard, the oft-rumored Sony Ericsson P3i smartphone is quite the looker. Of course, the renderings which you see to the right aren’t actual photographs of an actual cell phone, so it’s hard to say whether this is a concept that is currently floating around the offices of SE or if it is simply a very mean PhotoShop trick played on the mobile phone-loving community.

You’ll notice that in its closed position, there are absolutely no physical buttons shown on the face of the Sony Ericsson P3i. There’s not even standard keys for answering a call and hanging up. You’ll also notice that its raw appearance immediately brings the iPhone and the LG Prada phone to mind. Where it wins, however, is with the SureType-style keyboard that slides out the bottom. I would have preferred QWERTY out the side, but then Sony Ericsson would be called out for copping HTC’s style.

Is this for real? Then what’s up with the SE 123 badging?