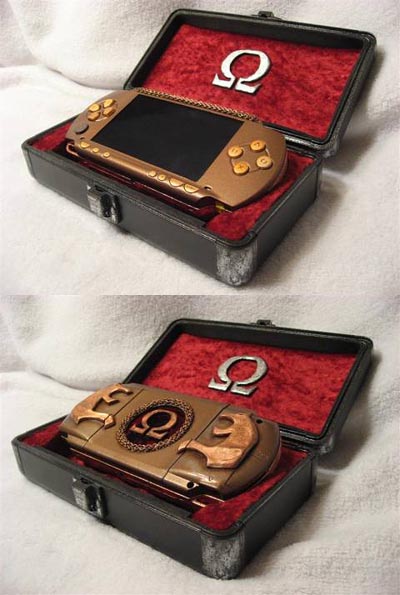 A few people have gotten all excited over the slimmer and lighter PSP, but it’s still not completely original. If you want an absolutely special Sony PlayStation Portable, then this God of War edition should be right up your alley, especially considering that it comes with its own awesome velvet-lined case too.

The PSP itself has been dipped in a bronze-gold color with a huge God of War logo thrown on the backside for an extra punch of attitude. The velvet-lined case also has a God of War emblem featuring prominently on the inside. Interestingly, the package does not with a copy of the action-adventure game featuring the bad ass Kratos.

Instead, you get two standard batteries, one extended battery, a retractable USB cable, a 4GB Memory Stick Pro Duo, a wall charger, demo disk, and that totally awesome custom display case. Bid on the one of a kind PSP on eBay (bidding is currently up into four figures). And yes, it’s rocking firmware 1.5 and we all know what that means.