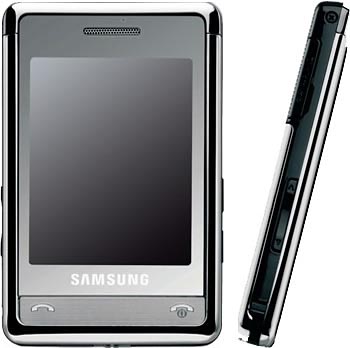 The form factor for the new Samsung SGH-P520 isn’t exactly new for the company, because they have produced calculator phones in the past, but this is the first time that the series has received a 2.6-inch QVGA touchscreen. Bearing a remarkably similar design as the LG Prada, the Samsung SGH-P520 features only two buttons on its face: call and end.

The tri-band SGH-P520 doesn’t do 3G, restricting itself to just EDGE for wireless data. That said, there is a distinct possibility that Samsung will plunk a WiFi module in this puppy to provide for UMA calls. Could a North America-friendly model be produced to take advantage of T-Mobile’s [email protected]? Other critical features include a powerful 3-megapixel camera, 50MB of internal memory, stereo Bluetooth, and a microSD expansion slot. That, and it’s just 8.9mm thick.

No word on price.