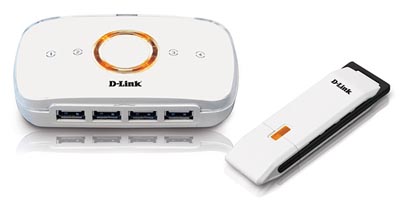 One day, we won’t need wires for anything. Tell someone ten years ago that you’d be able to get a high-speed data connection for your computer without wires and they’d laugh at you. Who’s laughing at WiFi and WiMAX now? The next frontier is wireless USB and while not entirely new technology, it’s really starting to make a splash in the mainstream. D-Link just announced the DUB-9240 Wireless USB kit that lets you connect USB devices without cables up to 30 feet away. Goodbye wires, hello freedom!

First, let’s get the model numbering out of the way. The DUB-9240 is the complete package, comprised of two primary components: the DUB-1210 adapter (which plugs into your computer’s USB port) and the DUB-2240 four port hub, which you can place just about anywhere. Each adapter can support up to three hubs, so one port on your laptop can effectively be split twelve ways.

The wireless USB technology that D-Link is using runs on the 3.4 to 4.5GHz range “to reduce interference” and it offers AES-128 encrypted connections at up to 480mbps. I’m not exactly sure where the hub gets its power from, though, so I’m not entirely clear how you’ll be able to run portable hard drives, webcams, and the like off of the DUB-2240.