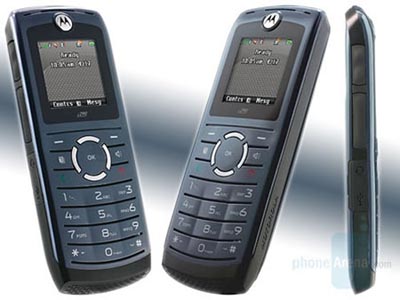 Apparently, hell has frozen over, because Motorola has created an iDEN-based handset that doesn’t weigh a ton and doesn’t look like a huge ruggedly rubber rock. The leaked Motorola i290 is the company’s first slim iDEN cell phone, taking on a very similar form factor to the SLVR, except that this handset looks a heck of a lot tougher.

The leaked photographs show very little in terms of carrier branding, but there is one shot that has the Telus Mobility logo. NO pictures have indicated that this phone will be heading to Sprint’s lineup, but that would be the only reasonable assumption, considering that Sprint-Nextel is the only iDEN-using mobile service provider in the United States.

Naturally, specs are pretty slim (no pun intended). We hear that it has a small color display, miniUSB connectivity, and a 2.5mm stereo headphone jack. Sadly, it will probably lack a camera altogether.