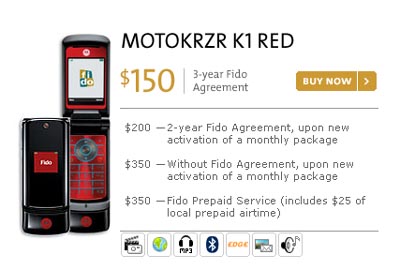 Better late to the party than never, right? After being picked up by a few other service providers, the Motorola KRZR K1 — specifically the Product (RED) version — has found its way to the doghouse known as Fido. Canadians can now grab the Red KRZR from either Fido or bigger brother Rogers Wireless.

Costing $150 with a three-year contract or $350 without a Fido Agreement, the MOTOKRZR K1 RED clamshell gets the exact same feature set as the KRZR found in everyone else’s lineup. This means that it’s got a quad-band GSM radio, a 2 megapixel camera with 8x digital zoom, Bluetooth, an MP3 player, and microSD expansion.

Available now at Fido.ca or your favorite cellular retailer.