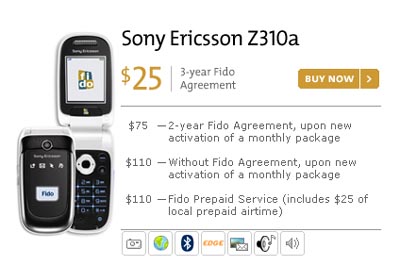 Fido is the oft-forgotten mobile service provider in Canada, because it typically receives cell phones that nobody wants. The pooch of a phone operator usually gets cheap phones with less than flattering feature sets and the trend is continuing with the decidedly entry-level Sony Ericsson Z310a.

Fido has had a recent infatuation with Sony Ericsson flip phones, having added the W300i, Z550a, and Z710i in the past while. The newly announced Z310a is even cheaper, selling for $25 with a three-year contract. For that price, you shouldn’t expect much. The tri-band (850/1800/1900) GSM flip phone sports a less than great VGA camera, Bluetooth technology, EDGE data, and a handsfree speaker.