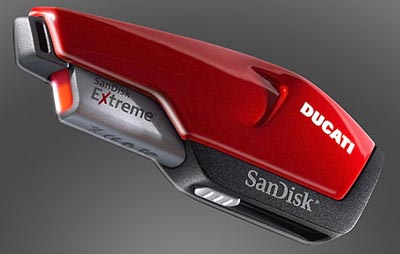 Asus and Acer have Lamborghini and Ferrari-emblemed laptops, so why can’t the same kind of branding happen on a smaller scale? That question has now been answered. Sandisk has announced a new line of USB flash drives that mimic the appearance of high-end motorcycles. Ladies and gentlemen, here is the SanDisk Extreme Ducati Edition flash drive.

The official memory product of the Ducati Corse, the motorcycle-maker’s subsidiary that “deals with the firm’s involvement in motorcycle racing.” As you can tell from the photograph provided, the styling on this thumb drive has clearly been inspired by the high-end bikes.

Like the Ducati two-wheelers that have a tendency to tear it up on city streets and on the track, these Extreme Ducati flash drives are also said to boast some of the fastest data transfer speeds — about 20MB/sec — in Sandisk’s stable. The standard 4GB model sells for $125.