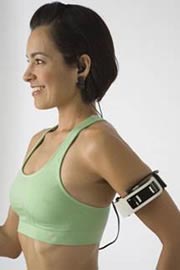 Now that it’s summertime, you’ll start to see more people going for runs around the block rather than being stuck in a stuffy gym with a bunch of sweaty guys. Whether you’re enjoying the great outdoors or the restricted confines of a treadmill, you probably want some tunes to accompany that sweat.

Yamaha clearly designed the Bodibeat personal music player with working out in mind, because this DAP bases its song selection on your heart rate. They claim that this is the first device of its kind.

In a nutshell, you load up the Bodibeat with a bunch of your favorite songs — yes, Barry Manilow and Slipknot can share a playlist — and then the player will select “songs to match the pace of the user’s workout.” That’s because it’s got its own heart rate monitor built right in.

No word on capacity or pricing, but Yamaha says that the Bodibeat will launch in “Summer 2007”, so I guess that means “soon.”