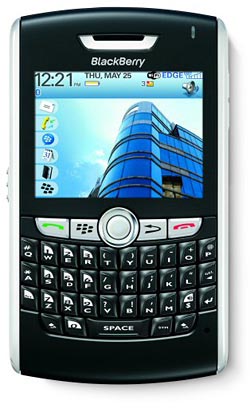 In addition to the three flavors of WiFi (802.11a/b/g), the BlackBerry 8820 also boasts integrated GPS, quad-band GSM, and a microSD/microSDHC expansion slot. You can plainly see that they went with QWERTY instead of SureType on this device as well, which will certainly be well received among most of the email power users in the audience. It’s also got that trackball thing in the middle.

The one feature that is sorely missing, however, is a camera. It doesn’t even have an ugly VGA picture-taker. Certain corporate customers may appreciate this omission, though, given that restricted areas typically don’t allow cameras of any kind.