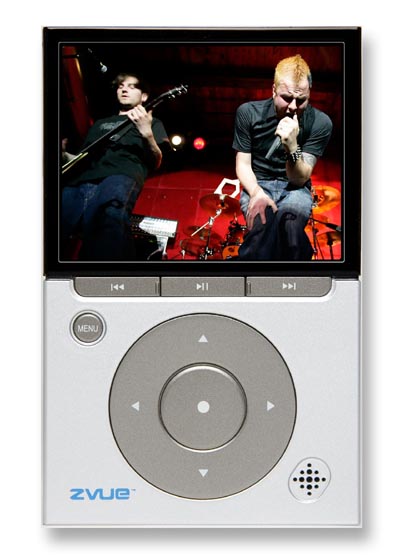 No, that’s not an iPod that you’re looking at, but the ZVUE 260 PMP is also considerably cheaper than any iPod nano or iPod Video. Available for purchase from Walmart.com, this player costs less than a hundred bucks.

The ZVUE 260 PMP was originally announced back in January by Handheld Entertainment. This third-generation device is supposed to offer significant improvements over the ZVUE 250 that it replaces.

Although the round navigational controls are reminiscent of Apple’s patented click wheel, they appear to be not much more than just buttons in a circular form. Boasting a 2.5-inch QVGA display supporting videos at 30fps, the ZVUE 260 is about more than just music, despite having an integrated speaker too. What’s missing from the package, though, is any sort of internal memory. You’ve got to provide storage yourself via the SD expansion slot.

UPDATE (07/18/07): I just received an email from a member of Handheld’s PR team telling me that the under $100 price point includes a 1GB starter card, which is supposed to be enough room for “up to six hours of video playback or storing approximately 500 MP3 songs.”