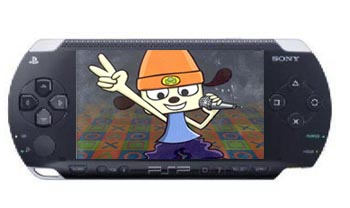 From the Nintendo side of things, we get a hit of nostalgia whenever the old school Super Mario Bros. theme gets played. For Sony fans, the soundtrack is a little different. The “beloved rapping puppy” is being reintroduced to the world via PaRappa The Rapper for the Sony PSP. Celebrating his 10th anniversary, PaRappa is sometimes credited for bringing rhythm games to the mainstream.

If you were a fan of the original, you’ll probably like this portable hip hop machine as well. You get the same “iconic art style and flattened animation, combining fun and vibrant characters with infectious music and a humorous storyline.”

Better still, you can share in all the baggy jeans goodness with up to three other friends via the PSP’s wireless connection. There is also the possibility of downloading eight remixes to accompany the original soundtrack. RaPappa The Rapper for the PSP is rated E for Everyone.