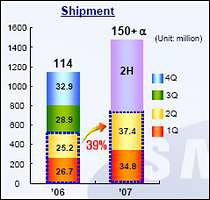 By producing phones with remarkably thin profiles and increasingly powerful feature sets, Samsung has managed to bump Motorola out of the number two spot in the mobile phone industry. It has just been revealed that Samsung now has greater global market share than Motorola, if only by a hair. As you know, the number one dog in the yard is still Nokia.

The cause of this shift is two-fold. First, Motorola expects to turn a loss this year, indicating that the RAZR-maker isn’t nearly as profitable or popular as it once was. Second, Samsung has increased its unit volume by nearly 50% compared to the same quarter last year. Samsung has gained significant market share both in emerging markets as well as in Europe.

Based on their own calculations, Samsung will have shipped about 37.4 million handsets in Q2 2007, compared to the 35 to 36 million that Motorola would have shipped over the same period of time.