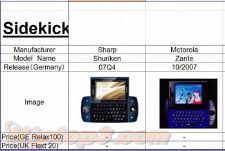 At least that’s what this leaked Excel spreadsheet seems to indicate, because right next to the Motorola Zante is a device called the Shuriken, created by Sharp. As you know, that’s the company that has been manufacturing the Sidekick for years.

Information is ridiculously slim at this point, but we can see that the expected launch is for some time later this year. Like previous incarnations of the Sidekick, the Shuriken — which could eventually get named the Sidekick 4 or the Sidekick LX — has a similar-looking form factor. Other vitals include a 3-inch widescreen, 1.3 megapixel camera with video, and microSD expansion.

Chances are that it will be a T-Mobile USA exclusive initially before getting a little more exposure in Australia, Germany, and maybe the UK.