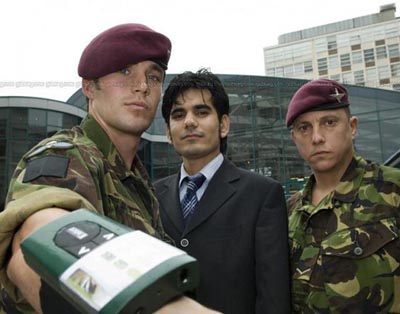 Soldiers deployed in the field don’t necessarily speak the language of the people around them, and we all know that this is the case with many of the brave men and women who are currently serving in Iraq. Sure, you could deploy a human interpreter, but that process can be cumbersome and waste valuable seconds, especially when time is of the essence. Amin Ismail, an Iraqi-born University of Derby student, has developed the AHKY wrist-worn translation device for circumstances just like that.

The prototype model has been programmed with ten phrases in three key languages — English, Arabic, and Kurdish — allowing soldiers in the field to quickly and easily communicate with civilians. The pre-programmed phrases include things like “come here”, “turn around slowly”, and “nothing will happen to you.” Prior to entering the field, additional phrases or languages can be loaded to best suit the upcoming mission.

Pardon my ignorance, but I think it just sounds a little too much like a portable voice recorder that has been loaded with a few samples. I must be wrong, because the (British?) military has ordered full production to commence within the next six months.