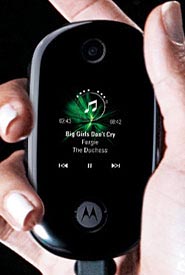 Motorola is probably best known for its use of four capital letters. We’ve got the RAZR, the SLVR, the RIZR, the KRZR… the list goes on and on. The Motorola PEBL U9 has always been a rather basic phone with a rather basic feature set, but much like the RAZR, Moto’s not about to give it up without a fight. Enter the ROKR U9.

Which is basically just the PEBL U9 in disguise. It’s fundamentally the same round phone with the same slide-and-flip design, except this time around they’ve tossed in some RAZR2-like music controls and a miniUSB headphone jack. So, let’s see here. The ROKR E1 wasn’t exactly the best thing kicking nor was the PEBL U9, so when you combine these two model sets, what can you possibly expect to get?

No wonder Motorola isn’t turning a profit this year.