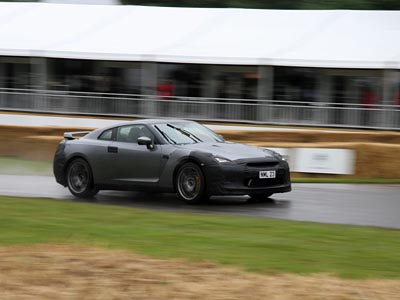 We still have to wait until October before the next-generation Nissan GT-R supercar is going to be officially unveiled in Tokyo, but in the meantime, we’ve managed to snag an up-close video of the car, including its interior.

As you can see from the picture above and the video below, the high-powered coupe is thinly camouflaged with only a few coverings to disguise the headlights and the taillights, suggesting that they’re still working on those details. But it’s the 3.7L turbocharged engine that will grab your attention, sending the power of at least 450 horses pulsing through all four wheels.

Check out the video below of the Nissan GT-R, as featured at the 2007 Goodwood Festival of Speed. Try to ignore the European supercars in its vicinity. Should Porsche be scared?