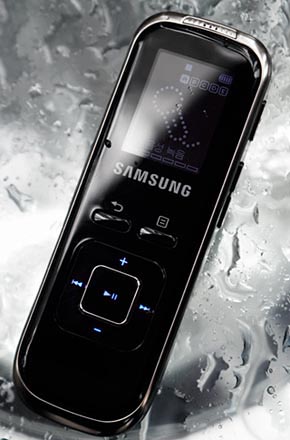 Just becuase the Samsung YV-150 is officially billed as a voice recorder doesn’t mean that it has to be ugly like so many boxy silver contraptions before it. Quite the opposite actually, because the svelte device has the same shiny good looks as the YP-K3 and YP-K5 digital music players released not that long ago.

Samsung has been doing a fantastic job with making some great looking devices lately. Their cell phones are thinner than ever and their MP3 players are definitely making some headway into an increasingly competitive market. The YV-150 is just the latest in this burgeoning growth. Key features include an integrated mic at the top, a speaker on the back, and a pair of AAA batteries powering the show.

In addition to its regular duties recording your babbling mouth — up to 66 hours of material on the lowest setting, 16 hours on the highest — the YV-150 also pulls double duty as a music player. On the downside, it’s only available in 1GB and 2GB flavors. Boo-urns.