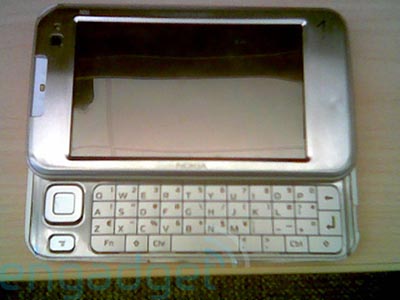 Even though the Nokia N800 received a rather major upgrade recently, that hasn’t stopped the Finnish developer from working on the handheld’s successor. What you see before is the rumored follow-up to the Nokia N800 Internet Tablet. As I’m sure you can see, this time around they’ve included a slide-out QWERTY keyboard, clearly responding to the feedback Nokia received on the first N800.

With the keyboard the way it is, the next-gen Nokia N800 — whatever they’re going to call it (N801?) — bears a striking resemblance to the several Pocket PC devices created by the team at HTC, except that the new Nokia will be quite a bit bigger than a regular Pocket PC phone.

The super shiny, almost chrome or stainless steel-like finish is also very attractive. We’ll have to stay tuned and keep our eyes peeled for any details as they arise. I’d imagine that Nokia has quite a bit in store for us.