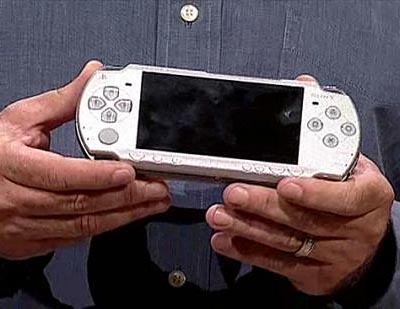 For Nintendo’s keynote speech at E3, they revealed the Wii Wheel, Mario Kart Wii, the Wii Zapper, and release dates for Super Smash Bros. Brawl and Super Mario Galaxy. Sony had a bunch of software news too, but easily the most notable announcement as part of their E3 keynote was the revealing of the PSP redesign.

Based on the picture, you might be wondering what’s new. Nope, they didn’t put in a second analog stick. You won’t find a built-in webcam, 8GB of NAND Flash, or the abandoning of the UMD format. Instead, this PSP update — it’s not really a PSP2 — is slimmer and lighter than its predecessor.

More specifically, the new PSP may look about the same from the outside, but they’ve cut the weight by 33% and the girth by 19%. Sony also promises improved battery life, faster load times, and TV video output. They’ve probably tossed in some anti-piracy measures as well.

The new PSP will be available in Ice Silver (packed in with Daxter, a Family Guy UMD video collection, and 1GB Memory Stick Pro Duo) and a Star Wars-themed white (packed in with Star Wars Battlefront: Renegade Squadron). Both Entertainment Packs will sell for $200 each.