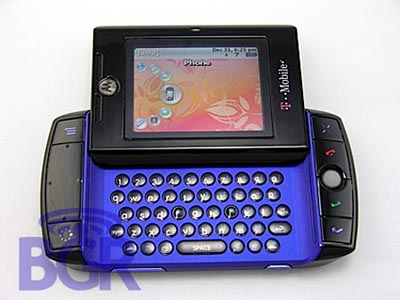 No matter what you call this device — the Motorola Zante, the Sidekick 4, or the T-Mobile Sidekick Slide — it looks pretty hot, even in this less than glorified live photograph. We first spotted the Motorola Zante earlier this month, but those were super stylized renderings that made it look a heck of a lot more shiny than it does in real life.

One fairly noticeable difference between the renderings and the live shot is the round navigational pad on the left side. On the live shot, this d-pad is missing (just like on the product sheet), but the unofficial render features the little circle quite prominently. Could it be a touch sensitive controller that lights up only when in use?

You’ll also notice that this live picture, as discovered by the Boy Genius, features all three of the major players involved in its creation: a Motorola logo on the left, a T-Mobile logo on the right, and the Danger OS front and center on the color display.