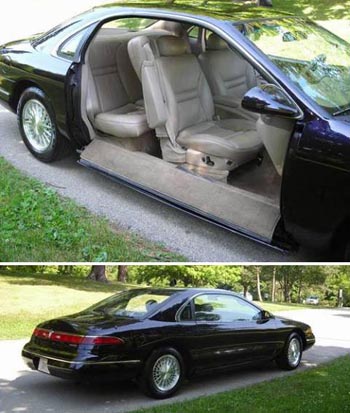 It’s hard to fathom that an innovation like this was found on a concept car from 1993, but that is the absolute truth and you have to see these disappearing doors for yourself to believe it. The only one of its kind, the 1993 Lincoln Mark VIII prototype features something that they call “disappearing doors”.

The door doesn’t swing open like on a normal car, nor does it take on the guillotine or gullwing approach. Instead, the handleless door rapidly retracts under the floor of the car. Yes, it actually retracts, and what’s more, it can activated with a remote control. At this time, only the passenger side door is working, but with a little ingenuity, you could probably get the driver’s side to do the same. I’d just hate to be stuck inside on a hot summer’s day when it malfunctions and refuses to open.

The car is up for auction on eBay with the current bid currently sitting at $20,000 with four days to go. Reserve has not been met.