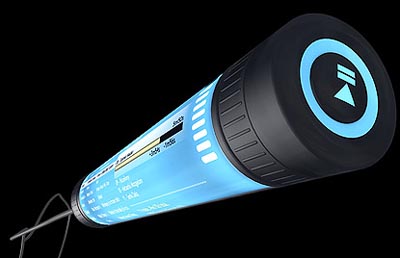 This MP3 player is literally on a roll as it is not much bigger than a regular ballpoint pen. What makes it particularly special, however, is that the center portion is all screen. In this way, it gives the appearance of a glow stick, but unlike the rave accessory, it’s not a solid beam of light; that screen actually displays useful information.

You might be wondering how you go about controlling the Musipen MP3 player. Well, the screen isn’t a touchscreen, but it is flexible OLED. To get the controls in action, you simply twist and push the knobs at either end. There’s also a button on the end for pause and play.

Clearly, this concept design by Chris Williams is a drastic departure from what is currently available on the market, and unfortunately, it is still quite a ways off from production. He hopes that by the time it does hit stores, the Musipen will be packing in excess of 60 gigabytes of memory.