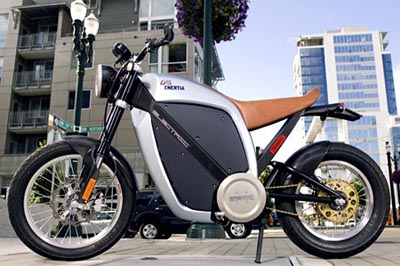 If you want to zip around town but not have to take out a second mortgage in order to afford the fuel costs, the Enertia full electric motorcycle might be the mode of transportation for you. Developed by Brammo Motorsports of Oregon, the electric bike should be ready for sale early next year with initial availability being apparently limited to the United States.

Unlike other electric bikes that are simply retrofits of existing models, the Enertia motorcycle was designed “from the group up to be a fully electric bike.” It’s not the fastest thing in the world with a top speed of 50mph and a range of 45 miles, but that’s more than adequate for most city dwellers. A full recharge — via a standard plug — takes about 3 hours.

Naturally, because the Enertia is full electric, it has zero emissions. That said, the generation of said electricity has to come from somewhere, so the level of pollution will largely depend on where you’re getting your power.