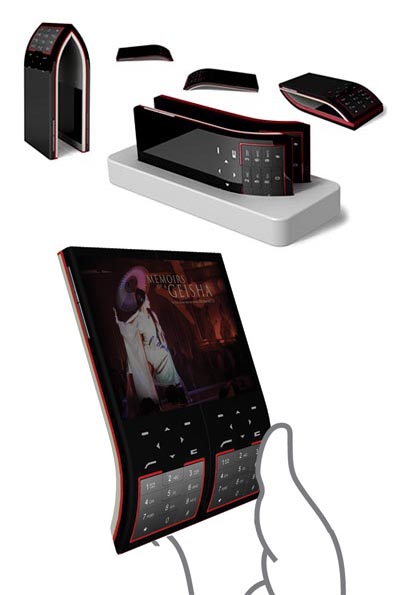 In Gestalt psychology, they teach you that the whole is greater than the sum of the parts. That is apparently the case with the Duofone cell phone concept. Instead of just offering you one slickly designed mobile phone, the Duofone — as its name implies — is comprised of two identical units.

When you shove them side by side, as indicated by the lower picture on the right, you get yourself a mega-sized screen for picture-gawking and video-viewing. Daewoo Kim, the designer, reminds us that two heads are better than one, so such must also be the case when it comes to the head (or displays) of cell phones. It’s all about cooperation and being greater than the sum of the parts.

In addition to sharing the screen real estate, the Duofone can also share battery power if one happens to be running a little low. Taking the relationship further, they say that “it even looks like a couple in bed when docked in its charging cradle.” Yeah, it’s more than meets the eye… too bad it’s not a robot in disguise.