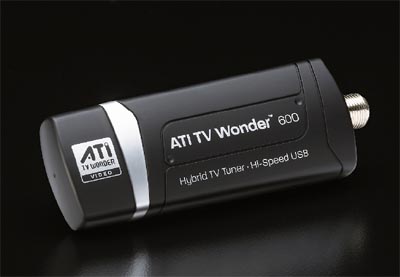 The company that is sometimes referred to as the anti-Intel does more than just create processors. Now that the relationship between ATi and AMD is so firmly ingrained, the two firms work very closely together on a number of projects and this is the latest. AMD has just announced the ATI TV Wonder 600 USB, an easy-to-install dongle-like device that brings HDTV, including DVR capabilities, to your laptop computer. It features AMD’s Catalyst Media Center software which is designed to expand upon the functionality offered by Vista Media Center and Windows XP Media Center Edition.

In addition to the ATI TV Wonder 600 USB itself, you also get a slim credit card-sized IR remote and an A/V input adapter to grab video from a camcorder or VCR. Naturally, while it is being marketed more toward the notebook side of things, the TV Wonder 600 USB is perfectly suited for operation with a desktop as well; however, AMD also announced the desktop-minded ATI TV Wonder 600 PCIe today as well, a package that slides into the appropriate PCIe slot on your motherboard.

Both units are expected to ship by September 2007. Pricing has not yet been announced.