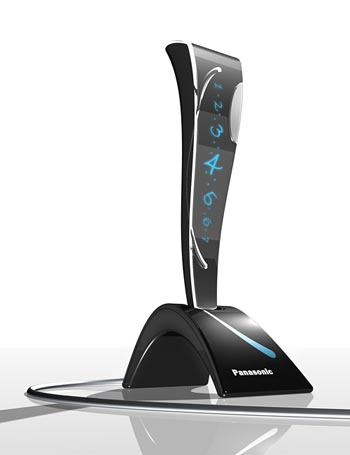 On the one hand, you have people that want a virtual Swiss Army knife when it comes to their cell phones. Other people just want the basics, but they want the thing to look absolutely crazy. This handset falls into the latter category. Designed by Christina Tapp, the Panasonic Art Nouveau phone is slick, sleek, and slim, boasting an extra curvaceous appearance to lure you in.

As you can see from the picture, it doesn’t appear to have a traditional display or keypad of any kind, instead opting for what looks like touch sensitive controls. I can see the digits 1 through 7, but what about when you want to dial 8, 9, or 0?

Yes, it’s just a concept and hence that’s why the only pictures provided by Ms. Tapp are computer renderings. I can’t imagine the Panasonic Art Nouveau being all that functional, but it’ll certainly turn a few heads at a cocktail party in Beverly Hills.