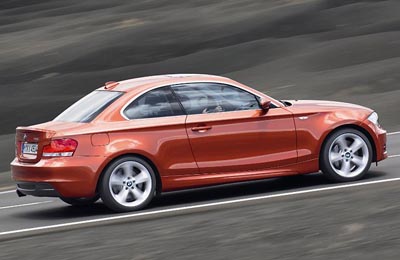 I thought that the Mini brand was how BMW was going to approach the entry-level market in the United States, but apparently I was wrong, because it has been confirmed that a couple of 1 Series Bimmers are destined for American showrooms. What’s more, the new coupes will go on sale as early as spring 2008, introducing Yankees (and Canucks?) to what a more affordable BMW looks like.

The 1 Series Coupe will come in two variants. The 128i will be powered by a perfectly capable 3.0L 6-cylinder engine, producing some 230 horses and 200 lbs-ft of torque. The more powerful 135i will get its umph from a twin-turbocharged 3.0L inline-six good for 300 horsepower and 300 lbs-ft of torque. And these engines are supposed to be entry level? I think not.

Maybe we shouldn’t let that “1” in front deceive us, because these numbers are very impressive. Now, what about price?