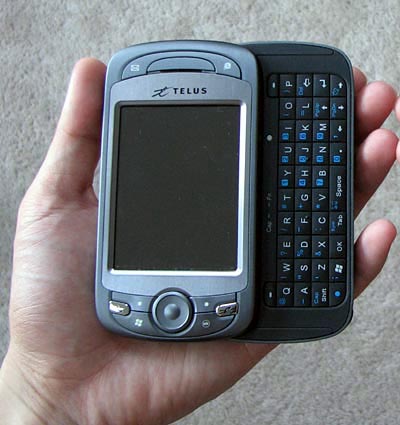 HTC has been making Pocket PC phones and Windows Mobile smartphones for a long time, but only recently have they started to market their products under their own banner. Earlier this month, we reported that the Taiwanese phonemaker was invading Canada with an army of smartphones, one of which is the HTC P4000 available through Telus Mobility. Well, I’ve spent the past 10 days or so playing with the HTC P4000 and overall, I’m quite impressed with this clearly business-oriented Windows Mobile Pocket PC phone.

The P4000 is a CDMA device, but it’s also got the 3G thing going on with high-speed EVDO. In just about every way, the HTC P4000 is identical to the HTC Mogul (Sprint). The one critical difference is that Telus opted for the tried and true Windows Mobile 5, whereas Sprint lunged into the next generation by pre-loading Windows Mobile 6.

The construction is super solid and I love the slide-out QWERTY keyboard. Unlike many of its predecessors, the P4000 has a spring-assisted slider rather than a full manual one. Although the keyboard feels solid and there’s no wobble in the open position, I felt the keys were too bunched together with no sense of separation. You just have to trust that you’re pressing the right buttons. The five-way navigator on the face, as well as the four other soft keys (including the Windows and OK buttons) are equally lacking in tactile feedback. I do like having the OK button on the face, however.

As this is a Pocket PC, the large color display is a touchscreen: the retractable stylus comes out of a slot in the bottom right. The processor is adequately speedy for most applications, but you’ll find that the more you run — when you press the X, it only puts programs in the background; it doesn’t close them completely — the slower it becomes. This is especially apparent when the P4000 switches from portrait to landscape mode and vice versa.

I must have had some sort of mental hiccup in there… sorry for calling it Intellisync. I of course meant ActiveSync. If you didn’t catch that error, then ignore this sentence. 🙂

Although this Pocket PC phone has a camera, I’d hardly call it a cameraphone. The 2.0 megapixel camera is okay for a phone, but it’s a far cry from even the most economical of standalone picture takers. It does what it needs to do — including video — but don’t expect to get photos that you’ll want to display on the mantle.

The portable version of Windows Media Player is what it always has been: adequate, but not astounding. Watching videos on this thing, especially in landscape mode, is quite enjoyable though.

To get onto the web, HTC has provided us with a full HTML browser in the form of Internet Explorer. There are two main connectivity options. First, if you happen to find yourself in a WiFi hotspot, you can quickly hit the hard switch on the left side of the phone to activate the wireless radio, let it detect the network, and away you go. Unfortunately, the 802.11g speed is somewhat bottlenecked by the processor.

Alternatively, you can hop onto the speedy 1xEV-DO network that Telus is so proud of. It’s certainly nowhere near as quick as WiFi, but it’s a significant improvement over the EDGE that they have at Rogers. When Telus rolls out Rev.A, I expect another bump in performance (but Rogers will have fully launched HSDPA by then, I suspect).

Comparing the HTC P4000 With the T-Mobile MDA

If you are currently using a variant of the HTC Wizard — like the T-Mobile MDA or Cingular 8125 — you might be asking if the P4000 is worth the upgrade. If you have the extra money kicking around, I’d say it’s worth it. The P4000 is thinner, better-looking, and substantially lighter. You also get a camera bump from 1.3MP to 2.0MP, as well as the switch from miniSD to microSD. Some other differences include the addition of an OK button on the face, a scroll wheel on the left, and the switching of sides for the sliding QWERTY keyboard. 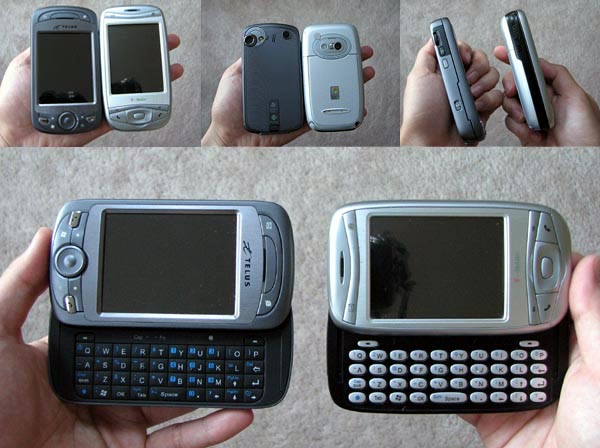 An Awesome Addition to the Telus Family

Telus Mobility has done a fantastic job by introducing Canada to the HTC P4000 Pocket PC phone. With everything you’d expect from a powerful business-oriented handheld, the P4000 delivers on just about every front. The build quality is second to none and everything feels rock solid. Performance is quite good, although you will experience some lag from time to time. The textured back is also a very nice touch.

In the next generation, I’d like to see some better keys (as described above), a better camera, and hopefully a further improvement in battery life. Use this thing moderately and you’ll be charging it on a daily basis, if not more often. For another alternative, check out the WiFi-less HTC S720, also from Telus. It’s got a conventional numerical keypad and a sliding QWERTY one.

The HTC P4000 is available now from Telus Mobility for $199.99 when you sign a three year contract, assuming you get a qualifying voice and data plan.