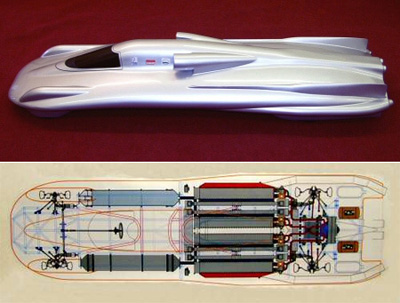 Yes, it looks like some futuristic car. It’s made of aluminum and carbon, and it has a steel frame. It’s steam-powered. It’s also totally fast.

It had better be to keep up with the task assigned it. A team of engineers, drivers, and all-around speed enthusiasts is taking aim at the world land speed record, not only in the mile but also in the kilometer. As any distance record aficionado can tell you, that’s two different ball games. (For the record, the kilometer record is 121.6 and the mile record is 145.6. The mile record isn’t all that old, though, having been set in 1985. The kilometer record, though, is more than 100 years old, which makes you wonder what kind of rocket fuel they were using way back then.)

Anyway, as you can tell from the photo, this is a vehicle totally engineered for speed. You probably wouldn’t get away with driving this on your daily commute, even if it is a rear-wheel drive. You probably also wouldn’t want those four boilers on the back powering the steam engine, although that’s exactly what is intended to vault this vehicle into record-setting status. (And, in case you’re wondering, they’ve included a parachute on the back to help stop the car once its record-setting attempt is finished.)