When the Nokia N800 Internet tablet was announced earlier this year, we knew that it was going to be pretty revolutionary. It puts the entire world wide web in the palm of your hand. While we knew that it came with integrated WiFi, no one had attempted to complete a Skype call on the device. That is, until now.

After some stumbling and bumbling, the Nokia N800 can now officially do the whole VoIP dance that has everyone, er, dancing. Here’s a shot from a trade show, displaying the Skype application running on this powerful handheld. Oh, and in case you missed it the first time around, the N800 also comes with Bluetooth, a webcam, and a full screen finger QWERTY keyboard.

Cool. Given that machines like this are available and there is such a widespread availability of free WiFi, could we soon by waving goodbye to the conventional cell phone? 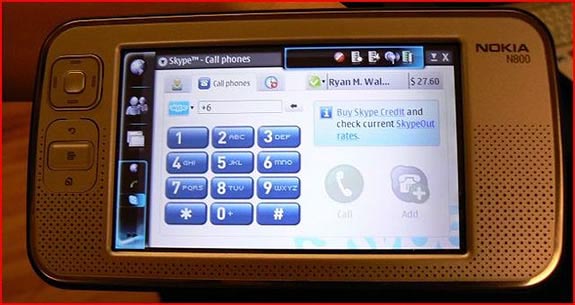