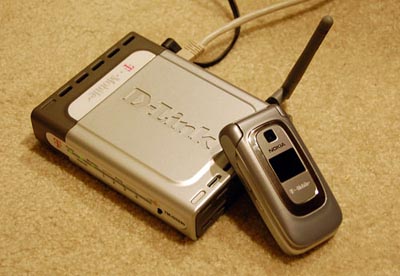 T-Mobile is one the few remaining networks in the United States that lacks a 3G connection. Okay, so Cingular/AT&T don’t have one either, but at least they’ve got the iPhone to ride on for the next little while. In any case, T-Mobile has just announced the availability of what they call HotSpot @ Home, a service that lets you make WiFi calls on your mobile phone, in addition to the usual cellular stuff.

In order for this to work, you’ll have to adhere to these three critical steps. First, this service apparently only works with a pair of $49.99 phones — the Samsung t409 and the Nokia 6086 — that boast both GSM and WiFi radios. Second, if you sign up for [email protected] service, T-Mobile will give you a free D-Link or Linksys wireless router to use in your home. Third, you’ll need to pony up an extra $10 per month to make those WiFi calls.

Interestingly, the call only has to be initiated via WiFi for it to be included. This means that you can start a call in your living room and stay on it all the way to the office, and the whole thing will be “free”, despite the fact that you would have hopped onto the cellular side of things the moment you stepped out the door.

The WiFi call service will also work in any T-Mobile approved HotSpots. You know, like Starbucks.