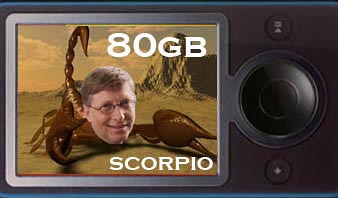 Just because the freshman version of the Zune hasn’t done quite as well as Microsoft had hoped doesn’t mean that they’re giving up hope. Bill Gates is not going to run away with his tail between his legs; he’s going to grow a stinger on that tail and attack the competition. Word on the street is that Microsoft is gearing up to announce a new 80GB Zune next month and the device carries the codename Scorpio.

Now, don’t get this new music and video player confused with that obscure character from the Simpsons (although some may say that Gates is an equally evil genius). Not too much in terms of details have been leaked at this time, so there’s no saying, really, if this new Zune will come with any other new features other than an inflated hard drive.