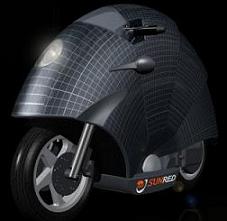 We have solar-powered cars and boats, houses and generators, why not motorbikes? Spain’s SunRed, an automaker known for its sleek, exotic cars (including a solar-powered one) has asked and answered that question, resulting in a futuristic-looking bike that might look like something extraordinary out of Knight Rider or Batman but will likely be popular only for small-to-medium commutes. Although the bike packs 25 square feet of solar panels around its frame to maximize power from the Sun, the electric motor can power up only to 30 mph and go only 12 miles between charges.

Still, it’s a novel idea whose time has come. We hope that by the time the real thing hits the streets (It’s only a prototype, right?), those mph and distance figures will be much higher. And we hope that’s before Robocop becomes a reality.