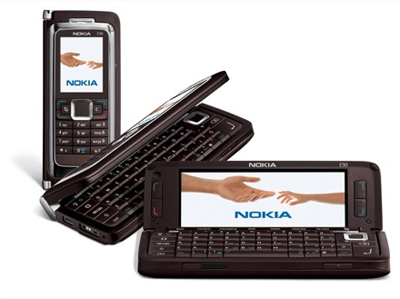 Not that Nokia needs to go its own way, since it’s one of the most recognized names around the globe. But the company has renewed its U.S. promotion of its “E” series of smartphones unveiled at 3GSM. That would be the E61i, the E65, and the E90—3G Symbian-based smart phones all, aimed at high-end business users.

All three phones are dual-capable, offering GSM and Wi-Fi connectivity. All three phones, Nokia wants to be able to say, will be unlocked. Both of those elements could be barriers to the phones’ acceptance in the U.S., which tends to want things like connectivity and portability closed down rather than opened up. Still, Nokia reports that it already has 140 resellers ready to roll when these phones come out (which will, by the way, be sooner than expected but we’re not sure exactly when). That gives you more than enough time to start saving up: The E90 tops out at US$1,000, while the E61i and E65 will sell for a mere US$530.